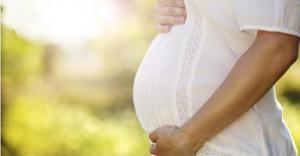 It is caused by the lining of the uterus being found elsewhere in the body including the ovaries or vagina.

A study, on nearly 15,000 people in Scotland, found the condition increased the risk of miscarriage by 76%.

The team at Aberdeen Royal Infirmary said that women needed to be informed of the risk.

Endometriosis can be hard to identify and is thought to affect between 2% and 10% of women.

The research team analysed data from 5,375 women with endometriosis and 8,280 healthy women.

Data to be presented at the annual meeting of the European Society of Human Reproduction and Embryology will show most pregnancies were fine, but there was a higher rate of complications.

The odds of an ectopic pregnancy - in which the foetus develops outside the womb - were nearly trebled from 0.6% normally to 1.6% with endometriosis.

The chance of miscarriage increased by 76%, a premature birth by 26% and the need for a caesarean section by 40%.

It is thought changes to the way the uterus functions as well as increased inflammation were damaging the pregnancy.

Dr Lucky Saraswat, who will present the findings at the meeting in Lisbon, said: "Some things cannot be changed like ectopic pregnancy or miscarriage.

"[If] we can diagnose it sooner so we can act sooner... with early intervention and probably improve outcomes for these women."

She said such women may need extra monitoring, such as more ultrasound scans, during the pregnancy.

Prof Andrew Horne, a consultant gynaecologist at the MRC Centre for Reproductive Health at the University of Edinburgh, said most women with endometriosis would become pregnant naturally.

"However, we do not discuss what happens when they do become pregnant.

"These new findings suggest that we may need to warn women with endometriosis who become pregnant that they are at higher risk of both early and late complications in pregnancy, and may warrant increased antenatal monitoring."

British Fertility Society chairman Prof Adam Balen said endometriosis was a lifelong condition and could be difficult to treat.

"You can treat it surgically, but it often recurs, you can try to suppress it with hormones, but the hormones are contraceptive at the same time

"If a woman wants to get pregnant and it's fairly mild you may try and treat it surgically and allow her to conceive naturally. Or they may end up needing IVF in which case you use hormone suppression."